A-Z Challenge 2013: W is for Wessex and Wyverns

You may have heard of Wessex before, and various companies in the southwest of England are trying to resurrect it, mostly by using the word in their company names. 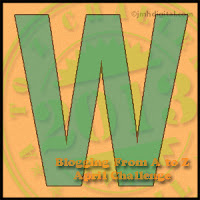 Wessex was the last English kingdom before all the kingdoms were joined together.  Its last king was Alfred (yes, you probably have heard of him).  Alfred (the Great) is remembered as having something to do with having burned the cakes he was supposed to be watching, but he was much more than that.  He reorganised Wessex and was at the forefront of a revival of scholarship and education.  He helped to translate several Latin texts into English.

As a result of these literary efforts and the political dominance of Wessex, the West Saxon dialect of this period became the standard written form of Old English for the rest of the Anglo-Saxon period and beyond. [Wikipedia] 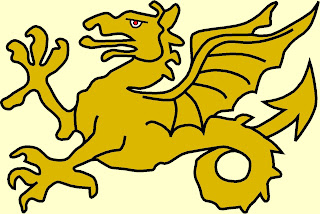 Wyvern: Although a wyvern may look like a dragon, it isn't really.  Dragons (in most cases) have four limbs, while wyverns only have two.  Mythicalrealm.com states this:
"There are many terms used to refer to dragons, and incorrect terminology is often applied. Wyvern, hydra, and firedrake, in fact completely different species, have all been mistakenly used."
"Wyverns, while close relatives of the dragon, have been argued as being not of the same order. In England they have been referred to as 'dragonets' because [they're] generally small in stature and basically appear to be adolescent dragons when in fact their body parts are fundamentally different."

The golden wyvern on a background of red is a symbol of Alfred’s Wessex.