King's Evil is another name for scrofula - a disease of the lymphatic glands, specifically tuberculosis of the neck.  This disease was similar to consumption, and quite a large proportion of those infected (who also died) were under fifteen years of age. 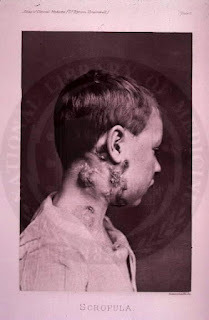 And the cure for this disease?  Historically, it was believed that the touch of the reigning monarch was the 100% cure.  Originally, the king would wash the diseased parts, but later it became merely the king's touch which would effect the cure.  Then the cured sufferer would be given a 'touch-piece', or gold medal.  In order to apply for the touch, the sufferer would have to bring a certificate from the local vicar and churchwardens to state that they had not had 'the touch' before.  Most of the touchings were performed in London, with Queen Anne being the last monarch to provide the touch.